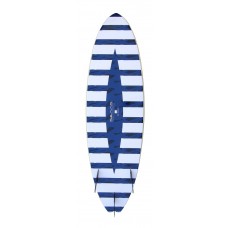 Stick onto the bottom of you board, and if you really need to, you can cut out small areas around the nose end, to expose your branding or sponsor details

Many years of anecdotal evidence suggests that a stripe pattern acts as a deterrent or repellent to sharks - but we now know there’s more to the story.
SAMS has applied scientific principles to this theory to discover that very specific contrasting, colours, shapes and dimensions work together for maximum effect. If you look closely, the stripes contain intricate detailing.

While sharks have a number of receptors used to detect odours in the water and weak electric fields, research has shown that vision is the crucial sense in the final phase of a shark attack.
Sharks actually have very good eyesight but they see colours and shapes quite differently to the way humans perceive them. Sharks see in black and white, but their perception of shading is very acute and impacted by the ‘reflective spectrum’ in the water (how bands of colour react to light).
Scientists noted the distinctive vivid coloration of many fish species, including the striped pilot fish which spends its life living alongside predatory sharks.

The pattern is designed to overtly present the wearer as unlike any shark prey, or even as an unpalatable or dangerous food option. At the very least this will provide the user with increased protection, but it could also provide the time needed to evacuate the area if a shark is in range. SAMS science is sound, testing is in its early stages but is ongoing. We invite ocean users to inform themselves and make a choice to use SAMS Technology but there are no guarantees. Read Caution to Users below or Visit SAMS FAQs at http://www.sharkmitigation.com/faq.html

Caution to Users
SAMS Technology applies newly discovered scientific principles of shark vision to the development of marine materials configured with specific patterns of colour, contrast, size and shape to present the wearer or object as either cryptic (disruptively coloured) or conspicuous in the ocean.  The principles are based on the physiology of what predatory sharks can see at different depths, from various angles, in different light conditions, and times of the day.

Testing to confirm shark behavior across species in relation to these technologies has commenced and will continue for many years.

The rationale for certain types of conspicuous and disruptive colouration affecting behavior of sharks has a long anecdotal history. SAMS Technology applies the new discovered information on visual science of shark vision to enhance these strategies.

Initial tests have been completed in live conditions off the coast of Western Australia, on the SAMS technology. Whilst the initial trials were strongly supportive of the scientific principles, they are not 100% conclusive, and further testing is under way.

The technology is designed around conditions of clear water and good light. In conditions where light has been reduced or water is murky protection will be reduced. At this stage that cannot be quantified exactly and will be subject to further field testing.

All sharks are dangerous and unpredictable creatures. It is impossible for SAMS to guarantee that 100% of sharks will be deterred under all circumstances with the SAMS technology. Water based activities in the presence of sharks is inherently dangerous and is not recommended therefore we recommend that if a shark is sighted that the user leaves the water.


Your Review: Note: HTML is not translated!

Enter the code in the box below: